(Warning: slight bad language ahead, as well as a serious topic)

Oh, Readers.
Why does it always seem that just when I think I’ve got things figured out, life throws something completely unexpected my way?
I apologize that it’s been so long since I posted, but I’ve had a lot going on. I recently finished my first novel, did some subbing, and then went out of town for spring break. I was working on two different blog posts, one over the experience of finishing my first book, and one that was just a humorous experience that I went through with running a blog.
But, like I said, life made a mess of all my plans.

But, as you’ll notice, this post is called “A Stroke of Miraculous Luck” and it’s for a reason. We didn’t have too much time to worry that we’d made the wrong decision. After my nana’s initial test results came back and all of them looked actually really good, she was admitted into the hospital and moved into her own room.I knew she was going to be okay when, after the doctor told her she had to be admitted, she pulled her covers up in front of her face, leaned over to me, and whispered, “This is bullshit.” By that point, she was already pretty much back to normal. When we were getting her settled into her own hospital room, the nurse gave her the stroke test again. She did them all without fail, only forgetting a word one time out of three tests. My mom and I were tearing up. Only a couple of hours before she couldn’t have read a single thing on them.
Somehow, by some miracle, the stroke did not seem to have had any permanent effect on her. Maybe it’s because my uncle reacted so quickly and gave her the aspirin immediately, maybe it’s because my nana just has an unusually resilient brain. Whatever the reason, she was speaking normally and already throwing a fit about having to be admitted into the hospital barely five hours after the stroke. The doctors told us that she would have to stay to be monitored because sometimes a minor stroke proceeds a massive one, but if that didn’t happen and  if all her test results came back clear she would probably be able to go home on Monday morning. Nana was NOT pleased by this news. She was even more displeased when she failed the gag test they gave her. This is when they test you by sticking a tongue depressor really far back on your tongue, which makes most people gag. My nana didn’t, and they were afraid that the stroke could have possibly affected the muscles in her throat, which meant that if she tried to eat or drink they might not function right, and she could suffocate. That meant that she couldn’t eat or drink until a speech therapist could check her out–and one wouldn’t be there until Monday. So only an IV for an entire day for her.
The next day and a half was a struggle to keep her from breaking out of the hospital. She was in as fine a form as I had seen her in ages, sassing us left and right and making us and the nurses and her doctors laugh. She complained about everything and asked if she could go home every ten minutes, insisting she felt just fine now and they’d kept her long enough. Sunday was a looong day, I can tell you. She kept trying to make us lay down on the bed with her or calling for another chair for my dad. 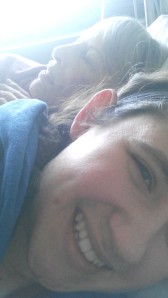 The Queen of Ornery.

But Monday was even longer. Luckily, someone came in early to do her gag assessment, and they decided that she just had a really high gag tolerance, so she was able to eat. But as often happens in a hospital, things take a lot longer than they often are predicted to. Instead of leaving early on Monday morning, we didn’t leave until really late that afternoon. Of course, my sister and mom had gone to the cafeteria not five minutes before the doctor came in to tell us that all her test results looked great, she was being released, and he was starting the paperwork, and I thought I was going to have to sit on her to keep her from running out the door. She kept trying to make me let her put her clothes on, even though she was covered in wires and still had an IV in. She kept bustling around the room trying to get all our things together, and to be honest, I was exhausted just watching her. The hospital apparently really agreed with Nana.
Finally the doctor had signed the papers, and eventually our nurse was able to make his way back to us and get her all unhooked. He brought a wheelchair to take her down to the car, and she looked at him like he was crazy. “Is that for me?” she asked him. No, Nana, it’s for Rachel. Definitely not for you, the lady who just had a stroke. Then she told him, “I can walk out of here– I can RUN out of here!”
Thankfully we were able to convince her that was not the best idea, and we talked her into taking the wheelchair, albeit reluctantly. It just so happens that months in advance of this, my mom had scheduled my nana a dermatologist appointment for that Monday to check some worrying spots on her cheeks that we were afraid might be skin cancer. And as it turns out, she was feeling so well that we ended up able to make the dermatologist appointment–though she was less than pleased about going to another doctor instead of getting to go home. I just had this horrible fear that she was going to somehow avoid disaster with the stroke only to find out she had skin cancer. And yet, wonder of wonders, both spots turned out not to be anything. She really was fine.
The whole thing seemed to happen so quickly, and we went from such a low to such a high so fast, with an enormous barrage of emotions in between. Only two days before she had her stroke, we had taken her with us for the day out to the Wichita Mountains Wildlife Refuge, and drove her all through it and up on Mt. Scott and taken her to lunch at a little restaurant we love down there. In those first terrifying moments when I didn’t know what might happen, all I could think was how grateful I was that we’d been able to do that before this happened.

And so yet again, I was reminded of this lesson– you never know what life will bring you, so you have to make the most of every day. It’s one of the most cliche sayings there is, I know, but in the course of my life it has been reinforced to me time and time again. So I just want to encourage you to take a minute to really appreciate the things you love in your life, whatever they are. Hug a family member, go to dinner with a friend, cuddle your favorite pet– because those are the really precious things in life that make it worthwhile. And if there is one thing I’ve learned, it’s that just when you think you’ve got a handle on life, you can almost bet it’s going to throw something crazy your way.
Miraculously for me, things worked out pretty dang well this time.