I know this post has been too long. I know it’s been ugly and rambling and you might not have even made it this far. I wouldn’t blame you. I’ve always hated reading about animals dying, because it broke my heart thinking about the pets I love dying. But truthfully, this is the flimsiest, most inadequate thing I’ve ever written. Boo gave me sixteen years of devotion. Sixteen years. How do you fit sixteen years of unconditional love into a blog post? I debated about if I would even write anything, because I haven’t even been able to stand the idea. I’ve had to stop so many times as I’ve been writing this, because I couldn’t see through my tears to write. Blogging and this blog seemed so stupid, so pointless since my baby got sick. Since I lost him. How could I possibly put into words the depth of my grief, the measure of my loss? How could I make people understand that he wasn’t just a silly animal, just some cat? And honestly, I don’t know if I managed to make you understand.
But, as he always did, Boo is still giving me things. The first night after I lost him, when I thought I was going to literally lose my mind, it soothed me to lay still and just write down things about him in my head. I just mentally wrote down all my favorite memories of him. I have always hoped that my inclination to write my emotions down meant that I really was suited to be a writer. Losing Boo has convinced me of it, and I have decided I’m going to write an illustrated book about him. I have felt lost, truthfully, since I graduated, and suddenly I have a purpose. Even when he’s gone, my baby is still comforting me.
Maybe this whole post has been a big, ugly mess, but I am fiercely glad I’ve written it. How else to celebrate my baby than sharing just how special he was in the best way I know how? Boo truly was my best friend, and the love of my life. Maybe you think I’m crazy, maybe you think I’m being just a little overdramatic, maybe you think I’m plain ridiculous. But I loved that cat more than almost anything in the entire world. He was a better friend to me than almost any human I’ve ever met, and I shared more with him than almost anybody.
Sixteen years. The majority of my life. From six years old to twenty-two years old. Every important thing that has ever happened to me, and all the stupid, insignificant, pedestrian things, too. He’s been there for all of it. For sixteen years, he was teaching me the most important lesson I think you can ever learn– how to love someone unconditionally. It doesn’t matter how many words I write or which ones they were. There’s simply no way to sum up or convey to someone a relationship that special. So all I can say is, I hope you have someone as good to you as Boo was to me, and then you’ll understand it without a word being spoken. 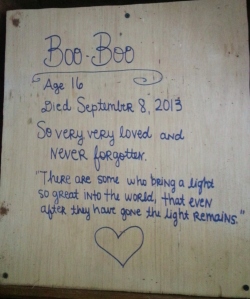