Ahhh-ahem. Cough cough cough. Meow. Testing, meow 1; testing, meow 2.
Please pardon me for all that. I forget you humans don’t speak Catish, and my English translation skills (just my typing skills, really) are a bit rusty.
Allow me to introduce myself. My name is Gustav Mustachio, and I am the latest triumph in my owner Sara’s quest for Crazy Cat Ladydom. Enjoy this picture of my charmingly handsome face, taken at the shelter where I was rescued from.

In the  two weeks (this post was delayed by my new mom getting violently ill and then Thanksgiving) since I’ve come to my new home, I’ve been busy teaching my new family all about me, and I’m now going to share some of those fun facts with you. I’m going to let my new slave, uh, I mean, owner take it from here. My dainty little paws just get too tired of this typing nonsense.

10 THINGS MY NEW FAMILY HAS LEARNED

1. He is the chillest cat in the entire world. He has settled without pause (or should I say PAWS, amirite people?!) into his new home, as if he’d lived here his entire life. He was not the slightest bit fazed by a new house, four new people, or a new cat. He was simply not concerned. He apparently just took a look around and decided, eh, this will do.

2. He is the smoothest little operator you’ll ever meet. Let me just say that we were DETERMINED to get a little kitten. We were hoping around two-three months at most. But when my dad and I took my mom and sister up to meet him, he came to greet us, and when I sat down on the floor, he climbed into my lap and kept curling closer, before putting the finishing touch on it by putting his paw over my arm so I couldn’t let him go. He took one look at me and knew I was an easy mark, and he had me suckered in about five minutes later.

I’m pretty sure Gus is Thomas O’Malley in real life.

3. Gustav is a huge, fat fraud. He is not, in fact, chill and cuddly. He is actually insane. For two days, he just sprawled on the loveseat and slept, apparently charging his batteries to go on a crazy spree. Don’t try to hold him, he meows stridently and thrashes to be put down. God, I sure can pick cats.

4. Gustav loves to sprint around the house meowing and chasing his new brother, Finn. Especially in the dead of night, when mommy is TRYING TO SLEEP.

5. HE. IS. A. BOTTOMLESS. PIT. (I’m almost 98.5% certain that little Gustav’s giant belly just hovers on the verge of exploding at any given moment.)

“Wet food, dry food, people food– it doesn’t matter. It’s also irrelevant if I just ate all the food you gave me AND the food you gave Finn, if you’re having a bowl of cereal, I need that, too. Then I need some Whiskas if you’re in the kitchen. It’s all mine and I want it ALL.” — Gustav
Well, except kitty treats, of course. In a stunningly ironic turn of events, Gus is not the slightest bit interested in cat treats.

7. When he does sleep, he loves to do so in the weirdest possible positions.

Silly human, I am not interested in such petty concerns as gravity.

8. His new brother, Finn, was very skeptical of him at first, but Gus is winning him over.

After all, I make a great body pillow.

Just a fun note: Gustav is also obsessed with sleeping in my closet. He’ll spend hours sleeping on my shoes hidden behind my hangups– just like my love life.

9. Gustav Mustachio is quite a mouthful, so he has been dubbed “Gus-Gus.”

Yep, after this one. They have similar attitudes about food.

10. Gus-Gus is obsessed with the outdoors, and determined to go outside any chance he can. We even took him outside when it was snowing here and tried to dissuade him, but apparently Gus looks upon the frigid, frozen wasteland of winter and says, Get me some of that!! We are starting him on a harness to possibly take him on walks eventually. 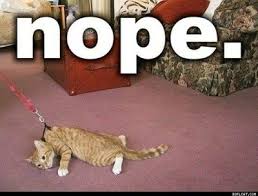 As opposed to this.

Finn is the freeze up and refuse to move type on a leash. Gus-Gus walked around on the porch with the harness on–awkwardly, but he was moving! Hopefully we can pursue this path with him and lead to a minefield of comic gold for the blog, uh, I mean, a happy and healthy way of indulging Gus and his interest in outside!

So there you have it, friends, a quick outline of our first two weeks with our new kitty. I feel like I learn something new about him every day, and he really is a joy. It’s very bittersweet, because it makes me miss my Boo baby so very much, but at the same time, we’re letting another kitty into our hearts and it makes me happy. It seems like Gus-Gus has always been here with us because he’s insinuated himself into our lives so seamlessly. I hope you’ll come along with us as we welcome this new member into our family!

Here I am innocently trying to take a pic for a recent post on my bargain fashion blog and BOOM– cat butt. So naturally I had to stop and take some pics with my new kitty.

If you haven’t before, please, please, PLEASE go check out my bargain fashion blog and follow me there too!