How come it always seems that time moves so much quicker when you haven’t done something as opposed to when you have? Like in school, for example, when I hadn’t done an essay, suddenly I would find it was the night before and I had ten pages I needed to write.

I admit I have consciously been avoiding my blog, but when I realized it had been eight months since I last posted it came as bit of a shock. EIGHT MONTHS. So much can happen (and has) in eight months. For example, I could’ve had a baby in that time… SURPRISE I DID!

Hahaha just kidding!! Unless if by having a baby you mean I adopted two more cats to bring our grand total to four in our tiny duplex. Sebastian and Olivia were two tiny balls of fluff we had the brilliant plan to “foster” until they were old enough to go to a new home. Readers, I have never so vehemently lied to myself as when I swore I wasn’t going to keep them. My poor sister simply got dragged along with me. So meet our expanded herd:

Finn, Theo, Sebastian, and Olivia. Four cats. Plus Gustav and Henry, who reside with my parents. So really, six. My sister, who you might remember is a teacher, started at a new school this year and I went to meet her class. After she introduced me, before I could even speak, one little first grader goes, “Ms. Rowe, is she the one with all the cats?”
Honestly, I can’t say I blame her. But really, I wonder what I’m doing sometimes. It’s been two years officially since I lost Boo, my cat and best friend of sixteen years, and it doesn’t seem possible because I don’t miss him any less, and if I think too long about it I still cry, and feel a hole in my heart. Now I’ve taken on six of the little buggers. You think I would’ve learned my lesson, but apparently not. Lately, I’ve begun to feel more and more of a kinship with the Hug All the Cats girl:

Like, I’m pretty sure this is a fake video, but I FEEL her words in my soul. Unfortunately, I have been officially banned by my sister from adopting any more cats :(

So yeah, that’s one thing that’s happened in eight months. Some other developments: I went on another date, the US women won the World Cup (be glad I wasn’t blogging during that time, because for a straight month it would’ve been nothing but soccer), my sister and I bought our first house, which happened to be my nana’s old one, I turned 24, my best friend got married, and I am now officially over halfway done with the second novel in my Secret Lives series.

In case you were wondering, I wore this to get ready for my best friend’s rehearsal dinner. Obviously.

I know I teased you a little there by saying I went on a date, but don’t worry, nothing came of it. The guy was super nice but just not my type. I do have to share something with you, however, because my life remains, as ever, a cosmic joke. Since I have been trying online dating sites, I have given my number to exactly four guys. Their names? Mark, Mark, Brian, and Bryan. That’s in order. Because of course.
Sadly, none of those names are apparently working out for me, so I’ve decided to steer clear of them. Sorry to all my devoted guy readers named Mark/Brian who’ve been secretly in love with me since they first read my blog. I know it’s a crushing blow.

I also mentioned how my best friend got married. In August, my catmate (it’s like a soulmate but with a shared love of cats) Skye got married to her lovely lad Austin. I was a wreck and cried on and off the entire day, but it was seriously the best time ever and I was so lucky to be a part of it. They are genuinely soulmates and it continues my belief in true love.
It seems I am now at that time in my life where all of my friends are getting married. I literally have a wedding every single month from August to September. Skye’s was in August, I just went to my friend Holly’s this past Saturday, and I have one every month after. In November, I’m super honored because I get to be the maid of honor for my dear friend Kaitlyn. Guys, I really have made peace with being perpetually single. But I do admit it stings a little to be the single person at every wedding for FIVE MONTHS STRAIGHT. Sometimes I’m pretty sure I should just hire a guy to be my date to life events a la a Lifetime movie. That definitely wouldn’t be weird at all.

But anyway. There’s also the whole buying a house thing. We decided to buy the house from my nana because she couldn’t afford the payments on it anymore. They had renters in it for years, but they left it torn up so they haven’t had anybody in it for awhile and it was literally just costing them money. So, rather impulsively, we decided we’d buy it.

Have you ever seen that movie with Tom Hanks called The Money Pit? Yeah. We’ve been working on the house since the beginning of July and still haven’t moved in. On one hand, it’s really special because I spent a large majority of my childhood in that house. On the other hand, it was built in 1960ish and has been an utter nightmare to try and renovate. 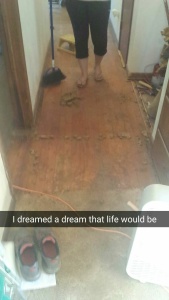 Thank heaven, it’s now way better now than it was in those pictures. My sister and I have decided that’s the motto for this house–it’s better than it was! I’m thinking about getting a canvas and painting that really fancy on it and hanging it right in the living room.

To be honest, we’ve spent pretty much all our time lately working on the house, so even if I had been keeping up with the blog I probably would’ve gone MIA in July. I’m honestly not sure what made me decide to post tonight. Part of the reason I haven’t been blogging is because I can’t imagine any of this stuff being interesting to anyone. I’m rereading this now and thinking who is going to read this? But I was sick home from work today, so I’ll blame it on the delirium of being ill.

I’m not going to say I’ll try and post again soon. I have no idea if I will, especially since basically any free writing I’ve been doing has been on my next novel. But I will say that I’ll try not to go eight months again before posting. I don’t want to worry anyone that I might’ve found a guy and got knocked up.